A recent Zogby poll shows Obama’s disapproval rating at 54%, slightly lower than the recent CNN poll (56%). Perhaps Obama’s recent high disapproval ratings will give any half decent politicians that still exist* the sanction they need to begin impeachment proceedings. If Obama didn’t deserve impeachment for all that he’s done so far–Fast & Furious, IRS, Benghazi and unconstitutional modifications during the rollout of Obamacare–maybe he deserves it when we add treason to the mix?

An online legal dictionary defines “treason” as “The betrayal of one’s own country by waging war against it or by consciously or purposely acting to aid its enemies.” And if Obama has not, via John Kerry, just acted consciously and purposely to aid our enemy, Iran, what do you call it?

According to the New York Times, Iran has agreed to temporarily stop enriching uranium to the extent required to build a weapon, and not to make further progress on the building of a facility to enrich plutonium (which could also be used to make a weapon). It has also agreed to limited monitoring to ensure they are adhering to the agreement. Iran has not, however, agreed to dismantle any of their existing centrifuges–only the links between them. And it has not agreed to monitoring to an extent “that the International Atomic Energy Agency had said was needed to ensure that the Iranian program is peaceful.” Experts consulted by the author of the Times piece said that all we get from this is, at best, about a month’s delay in the time it will take for Iran to acquire a nuclear weapon. Obama, for his part, says the deal has created “a path toward…a future in which we can verify that Iran’s nuclear program is peaceful and that it cannot build a nuclear weapon.” Kerry asserted that the deal would make our ally, Israel, safer. Maybe for a few weeks, if Iran actually adheres to the agreement?

What are we giving up in return for this “path toward a future”? The Times says we are giving Iran $6 to $7 billion in “sanctions relief,” only $4.2 billion of which it says will be release of funds earned by Iran from the sale of oil. Is the rest coming out of the pocket of the American taxpayer (Obama’s “slush fund”)? The Times doesn’t say. All we know is that, whatever form the rest of that relief will take, it doesn’t require the approval of Congress. The Times reports that Obama is able to make this deal via executive order.

While we wait to see whether any half decent U.S. politicians will step up, we can take some solace in the fact that Israeli Prime Minister Benjamin Netanyahu says that Israel is not a party to — and therefore not bound by — this “deal,” which he calls an “historic mistake.” He also reiterated his “red line”: “Israel will not allow Iran to develop a military nuclear capability.” If Iran is right, then Netanyahu has already been acting to make good on his promise by working to sabotage Iran’s nuclear program from within.

Here is my favorite cartoon by Bosch Fawstin on appeasement of Iran: 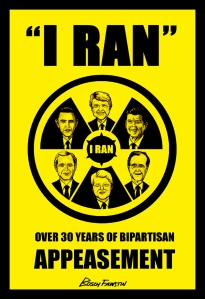 For more on Iran from Bosch, visit his blog.

*As of this writing, I am still waiting to hear what Ted Cruz, perhaps the most promising politician in Washington today, will say about the “deal.” I will update this post when I hear what he says.

Update: Sen. Cruz has released this statement, making clear that he would never have agreed to this “deal,” and implying that he would not even enter into negotiations with Iran (his rejection of “rapprochement”).